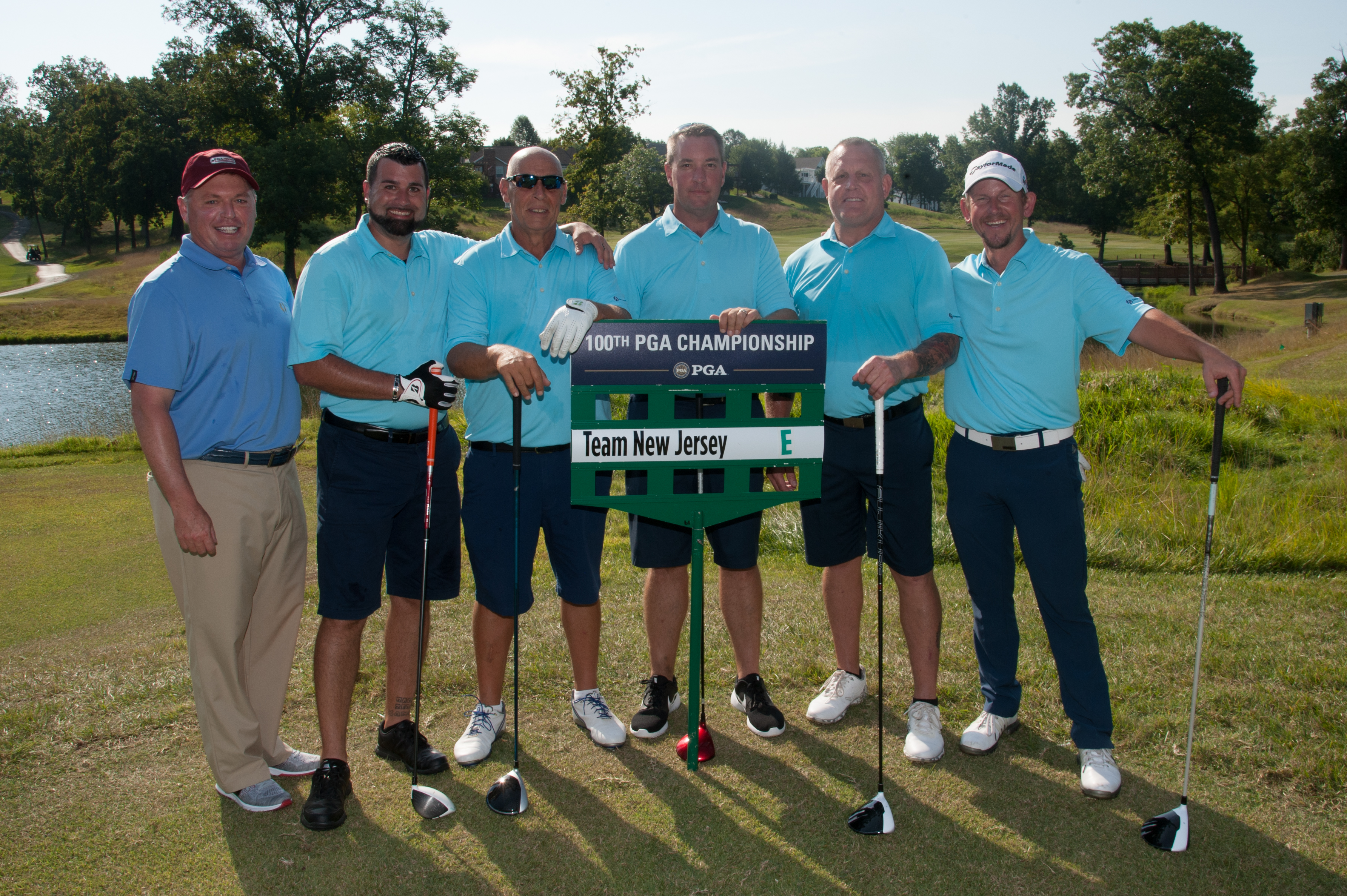 By Bob Denney
PGA of America

New Jersey’s PGA HOPE team shook off the effects of a 13-hour van ride, which was precipitated by a powerful northeastern storm Friday afternoon, and captured a second straight title Sunday (Aug. 5) in the 2018 Secretary’s Cup sponsored by Express Scripts.

Begun in 2016 and named in tribute to the Secretary of the Veterans Administration, the Secretary’s Cup nine-hole scramble match brought together 13 PGA HOPE (Helping Our Patriots Everywhere) programs. The field featured eight from the host Gateway PGA Section along with one team each from the Carolinas, Metropolitan, New Jersey, Northern California, and Philadelphia Sections.

The event celebrates the PGA HOPE program, which uses golf as a rehabilitation tool for military Veterans.

“We thank the New Jersey Golf Foundation, which helped us get a rental car,” said Wilcox, 51, who served 14 months in Iraq and now sports a 15 golf handicap. “We took about three or four stops and once we got to St. Louis we got three hours sleep. We got in a practice round off site yesterday, and today finished 7-under. It’s about motivation and pride in our PGA HOPE program and New Jersey. I don’t know if I would be doing what I do today in golf if not for Glenn Hockman. He was my mentor in my therapy recovering from PTSD. Golf is therapeutic for me. It gets me away from the worries of life.”

Stefanchik, the PGA Head Professional at Hawk Pointe Golf Club in Washington, New Jersey, had not met his teammates until last Tuesday. He was one of 13 PGA Professionals who merged with 52 Veterans, in the Secretary’s Cup.

He was looking for new niche, and found it following a last-minute cancellation from the original New Jersey PGA Professional.

“I’ve only known these guys for a few days, but we are now friends for life,” said Stefanchik. “I come from a military family. This is now one of my many callings in life. I know the commitment that these guys have made. This is one of the best programs that the PGA does. It just needs to grow.”

Among those in the gallery was baseball Hall-of-Famer Ozzie Smith, the president of the Gateway PGA REACH Foundation.

The Secretary’s Cup also attracted Lt. Gov. Mike Kehoe, who has worked with many Veterans groups while in office.

“It’s inspiring to be around both men and ladies who have served our country,” said Kehoe. “They are the inspiration for people like me. Golf is an interesting sport, because it is about competition. Everyone here who has served in the military understands what competition was when they went through training.”

Express Scripts Susan Stith, the Vice President of Diversity, Inclusion and Corporate Giving, said that the Secretary’s Cup was a special day in the company’s first year of sponsorship.

“What I saw today exceeded my expectations,” said Stith. “PGA HOPE is about partnership, community and caring. It’s an initiative that is invaluable and we are committed to it.

“Express Scripts employs 27,000, and one in 12 is a Veteran. So, a day does not go by that we don’t think about our military families, our Veterans, and what we can do to best support them.”

Whitmoor Country Club PGA Head Professional Brian Maine said the growth of PGA HOPE in St. Louis stems from a bond. “The Veterans embrace the PGA Professionals,” said Maine. “They feel like they are special, but actually it’s the PGA Professional who are getting the gift of working with the men and women Veterans. Each one of these Vets shares a story and you get to know them. It’s almost like they become family.”