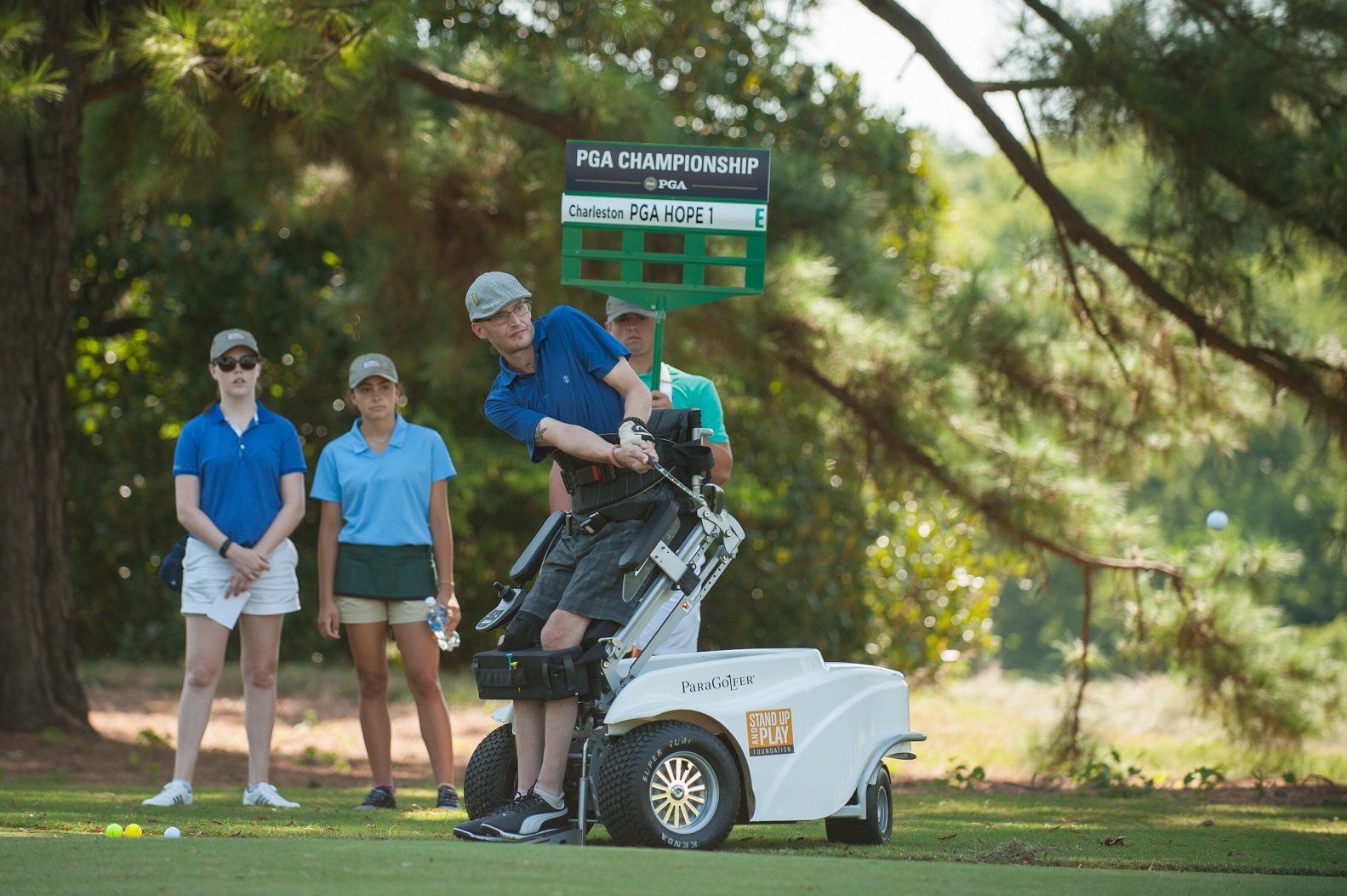 The Veterans were accompanied by five PGA Professionals in an event that developed out of a partnership between the PGA of America and the Department of Veterans Affairs, and is named in tribute to the Secretary of the Veterans Administration. PGA HOPE (Helping Our Patriots Everywhere) is a rehabilitative program designed to introduce golf to Veterans with disabilities to enhance their physical, mental, social and emotional well-being.

PGA HOPE is the flagship military program of PGA REACH, the charitable foundation of the PGA of America. There are 90 chapters nationwide, with the Carolinas PGA hosting eight.

“This has been one of the best days in the history of Charlotte Country Club,” said PGA Head Professional Andrew Shuck, whose staff hosted the Veterans at the oldest club in Charlotte, founded in 1910, or six years before the birth of the PGA of America.

Ralph Breeden, General Chair of the 99th PGA Championship, was personally involved in making the Secretary’s Cup a reality at CCC. He called Shuck in March to ask if the club would like to host the Secretary’s Cup. Said Breeden, “The club did a great job taking it from there. It was a wonderful day.”

As the Veterans completed the nine-hole journey across the pristine fairways, they were greeted behind the 18th green by 50 youngsters who are members of The First Tee of Charlotte. It was a non-stop autograph session for players signing pin flags and greeting new golfers.

“Hey, it’s not about us,” said former Indiana National Guardsman Josh Swindle, now of Charleston, South Carolina, pointing toward the youngsters. “It’s about them; they are the future of this game.”

A dozen years ago, the world literally crashed in upon Swindle, who had earned Emergency Medical Technician (EMT) status while balancing his National Guard duty. While answering a fire near his home in South Bend, Indiana, a wall caved in, leaving him paralyzed from the waist down.

“My world got awfully dark then,” said Swindle, a 35-year-old native of South Bend, Indiana. “I was not sure where I was headed. I found my way back, and PGA HOPE was part of my salvation. I can’t thank the PGA enough for what this program has done to help me.” Swindle competed while transported by a very special “caddie” – a ParaGolfer motorized cart, which was created in 2006 in Germany.

Retired Sergeant Major Roy Wilkins of Winston-Salem, North Carolina, is a 64-year-old former member of the U.S. Army Special Forces, who lost his right leg serving in Afghanistan. He said he has found his PGA HOPE experience “continuously rewarding.”

“This is an awesome program,” said Wilkins, who is a distant cousin of prominent civil rights activist Roy Wilkins. “You got to come out and try. It’s a true feeling to know that you’re still alive. I give classes and talk about PTSD (Post Traumatic Stress Disorder).

“You can’t kill it, but you can put it to sleep. By putting it to sleep, you are in your comfort zone.”