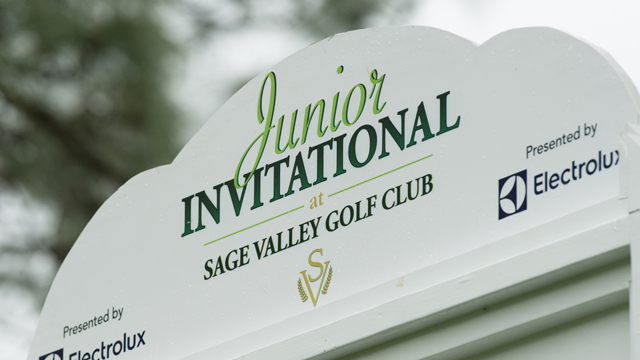 GRANITEVILLE, S.C. – PGA REACH and the Sage Valley Sports Foundation are excited to announce that the top two eligible finishers at the Junior Invitational will receive exemptions into the Boys Junior PGA Championship, which will be contested for the 42nd time July 31-August 3 at The Country Club of St. Albans in St. Albans, Missouri.

Since its birth in 2011, the Junior Invitational at Sage Valley has been modeled after the world’s best professional tournaments, inviting the 54 top-ranked junior golfers from around the globe. Its stringent invitation criteria have created an event with the toughest field in all of junior golf, which the WAGR recognizes by including it as a Category B event, the only junior tournament in the world to hold such a distinction. This year’s field includes contestants from 18 different countries – to compete for the Championship Trophy and its accompanying “Gold Jacket.”

“Since the outset of the Junior Invitational at Sage Valley, we’ve been of the belief that winning here, on this golf course, is an elite accomplishment that should be recognized appropriately,” said Tom Wyatt, Chairman of the Junior Invitational at Sage Valley. “We are honored that the PGA of America recognized our commitment to the future of junior golf, and that after only seven years, provided us with these exemptions. We are delighted that our partnership provides an additional opportunity for players to measure their talents against the best that junior golf has to offer.”

Begun in 1976, and conducted by the PGA of America, the Boys Junior PGA Championship is among the nation’s premier junior golf events. The Championship has served as a stepping stone for competitors to either collegiate and/or Tour professional careers. Past participants include Tiger Woods, Phil Mickelson and Jordan Spieth.

Results from the Boys Junior PGA Championship have a significant influence on the composition of the U.S. Junior Ryder Cup Team, which competes against Europe’s top junior talents in the biennial Junior Ryder Cup, the most prestigious team event in junior golf.

The carolinas PGA section: diversifying the golf industry through the PGA WORKS fellowship

Growing the latinx influence on the PGA WORKS collegiate championship