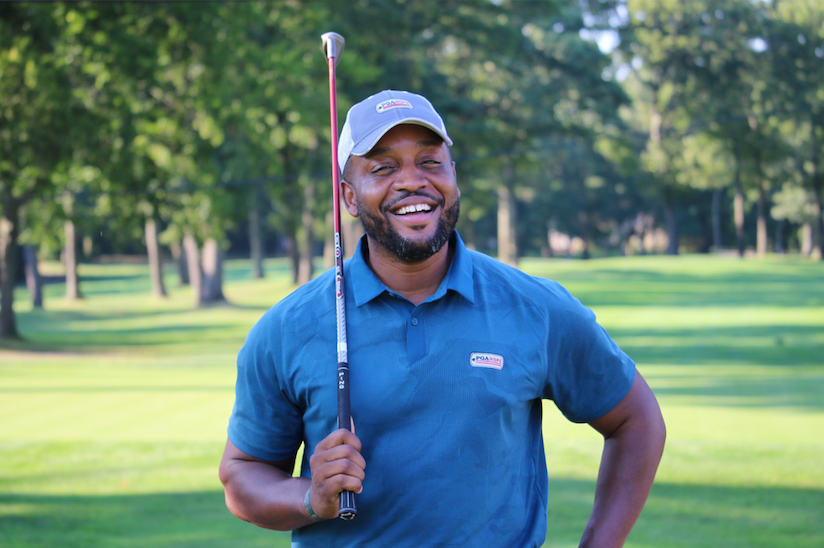 James Eugene, originally of Farmingdale, New York, is one of many success stories that are a direct result of PGA REACH programming. A U.S. Marine Veteran lacking a sense of direction upon his return home from service, PGA REACH has significantly impacted Eugene’s life through golf.

PGA REACH is the 501(c)(3) charitable foundation of the PGA of America. The mission of PGA REACH is to positively impact the lives of youth, military, and diverse populations by enabling access to PGA Professionals, PGA Sections and the game of golf.

Before Eugene discovered PGA REACH in 2017, he was in a state of despair, similar to a state that many Veterans find themselves in as they transition to civilian life upon their return to the U.S. from active duty.

“In the military, you go through a checklist of discharge requirements to help you leave the service,” said Eugene. “What you aren’t prepped for is the unknown of what’s to come next. There’s no road map given to Veterans once they leave the service. I also didn’t know what sort of career path I would take, and that’s where the loneliness kicked in that would cause several trials and tribulations.”

Realizing that Eugene was in a similar state of despair, a friend who graduated from PGA REACH’s military program, PGA HOPE (Helping Our Patriots Everywhere), recommended that he sign up for the program to regain a sense of camaraderie and structure that was absent since his departure from the U.S. Marines Corps in 2013.

“I was at a point in my life that most Veterans reach, where I felt uncertain about what my future looked like in my post military career,” added Eugene. “Upon exiting, I realized I no longer had the camaraderie I once felt in the Marines. It can be scary and puts you in a mode of panic. PGA HOPE made us feel like we weren’t alone, and we had a team of like-minded Veterans who had each other’s backs.”

PGA HOPE introduces golf to Veterans to enhance their physical, mental, social, and emotional well-being. The program introduces the game through a developmental six to eight week curriculum, taught by PGA Professionals trained in adaptive golf and military cultural competency. After beginning the program, it didn’t take long for Eugene to get bitten by the golf bug.

“I caught the golf bug and there was no looking back,” said Eugene. “I credit much of that to the Metropolitan PGA Section, because they embraced us [Veterans] with open arms from the start and made us feel like we were a part of something. I’ve been through many Veteran rehabilitation programs and some felt like I was only checking off a box; through PGA HOPE I felt like I was a part of a family.”

While attending the 2018 PGA Championship, Eugene discovered the PGA WORKS Fellowship. The PGA WORKS Fellowship offers a year-long, paid, full-time, entry-level employment opportunity for post-graduates to garner first-hand experience in PGA Section foundation operations and administration. It aspires to be the most valuable entry-level experience one can get in the golf industry as it provides a unique view of facets of the golf industry.

After realizing the Metropolitan PGA Section was hiring a fellow for 2019, Eugene quickly applied and was eventually awarded the job following an interview process. Similar to his experience with PGA HOPE, it didn’t take long for Eugene to become hooked on working in the industry.

“What made the fellowship so valuable to my career was my ability to assist in PGA REACH initiatives through the Section’s foundation operations,” added Eugene. “Having personally been through the program, it’s now incredible to be part of the operations and learn how it all comes together.  It is very rewarding to be able to work in a space that I know changes lives; after the PGA WORKS Fellowship I want to spend more time helping further PGA REACH initiatives.”

“As a marine you learn various leadership traits that make you a better person. Those core values help me when I’m assisting PGA HOPE Veterans and sharing my story with them; to give them hope that there is life after military service once you transition to civilian life.”

The PGA WORKS Fellowship also offers unique opportunities at PGA of America spectator championships like the PGA Championship for fellows working in host PGA Section offices. This past year, Eugene was able to be onsite in his hometown of Farmingdale, New York, to work at the PGA Championship held at Bethpage Black.

During the week, his responsibilities included working to maintain the driving range and short game practice areas of the course, while also performing social media coverage for PGA WORKS as needed. His favorite part of the week? Networking the PGA Members onsite, as he now aspires to pursue PGA Membership as a result of his personal life changing experiences with PGA Professionals throughout PGA REACH programming.

“PGA Members and the game of golf turned my life around,” Eugene explained. “That combined with a goal of serving my community and what I learned through the Fellowship, makes me believe PGA Membership is the perfect career for me to pursue. Once I got a taste of the golf industry, I knew this was where I was meant to be. I found my post-military career purpose, as PGA Professionals are charged with impacting lives through golf, and I want to help accomplish that mission as well.”

James has recently begun his path to PGA Membership, and we wish him well on his PGA Journey. To see James’ path first hand, you can follow him on Twitter and Instagram @jamesnyfinest, and on LinkedIn @JamesEugene.

If you’re interested in careers in golf, visit careers.pgahq.com.