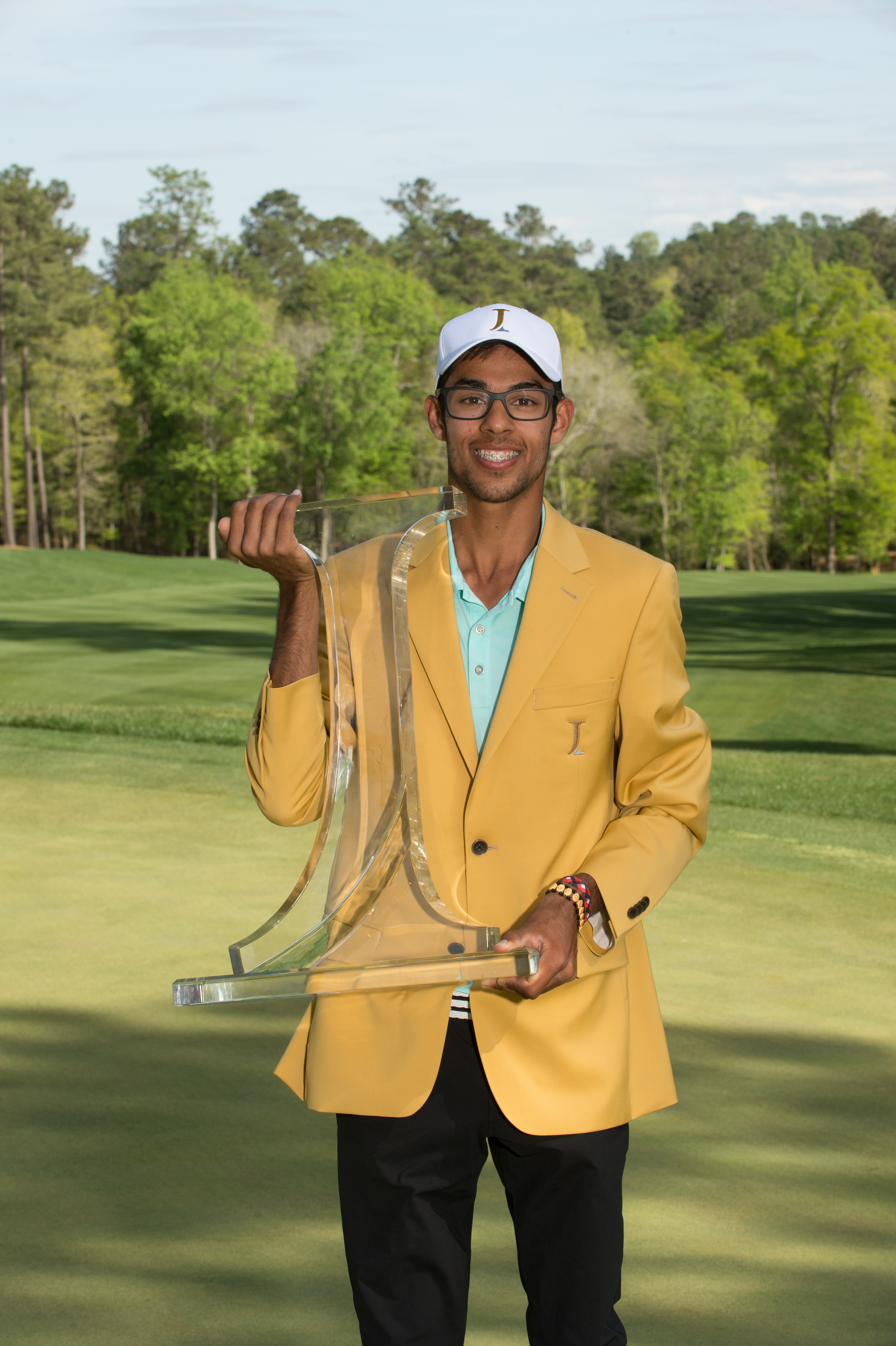 Bhatia Hangs On to Win the Junior Invitational at Sage Valley

GRANITEVILLE, S.C. (April 21, 2018) – Despite not having his A game during the final round, Akshay Bhatia’s ability to overcome adversity proved to be the deciding factor. Bhatia held on to claim the Junior Invitational at Sage Valley Golf Club, defeating Frankie Capan by one stroke.

Bhatia grinded to a 4-over 76 on Saturday, featuring seven bogeys and three birdies, to finish at 2-under 214 for the tournament. He demonstrated the poise necessary to claim the Championship Trophy and the prized Gold Jacket.

“I told myself all day that I’m still in control of this golf tournament no matter how many bogeys I made,” said Bhatia. “That’s how you have to think about this. Any time you’re leading like this on this big of a stage, it’s hard to keep it going. I’m definitely proud of myself.”

The Wake Forest, North Carolina resident, Bhatia, built a four-stroke advantage heading into the final 18 holes after rounds of 68 and 70. Despite this commanding lead, Bhatia knew his competitors would be coming after him.

“The two birdies I made [on 13 and 14] calmed me down,” said Bhatia, the reigning Boys Junior PGA Champion. “I knew I could make a couple mistakes coming in and still win this tournament. I’m just really excited. This is up there. This is such a big accomplishment.”

Bhatia was all square walking up to the par-3 12th tee box with round one co-leader, Sweden’s Ludvig Åberg, who bounced back from a disappointing second-round 75 by playing the first 11 holes bogey-free and 2-under. Åberg would double-bogey hole 12, opening up a two-stroke lead for Bhatia heading into the final six holes. Bhatia extended his lead to four with birdies at 13 and 14. With three bogeys to close out his round, this gap proved to be just enough.

Capan, of North Oaks, Minnesota, kept Bhatia in his sites as the round came to its final few holes. Following a stretch of four birdies between holes 4 and 10, Capan would rebound from bogeys at 11 and 13 with a birdie on the 15th to reach 2-under for the tournament. After bombing his drive to about 340 yards on the 452-yard par-4 18th, Capan put himself in great position to finish strong. A misexecuted wedge shot trickled off the green, and he was unable to get up-and-down for par.

“Starting the day, I felt like I was hitting good shots but I wasn’t able to capitalize,” said Capan, who began 1-over through his first three holes. “I knew I was playing well. [After the birdies at holes 4, 5, and 8] I was feeling really good about my game, especially going into the back nine. Overall, I felt good about my game coming into today. I wouldn’t have been surprised if Akshay shot 10-under; he’s a really good player.”

The top 15 eligible finishers at the Junior Invitational will receive points towards qualifying for the 2018 United States Junior Ryder Cup Team. The 11th edition of the Junior Ryder Cup will be contested at Disneyland Paris in Marne-la-Vallée, France, September 24-25. In addition, the top two eligible finishers earn exemptions into the 2018 Boys Junior PGA Championship, which will be held at Valhalla Golf Club in Louisville, Kentucky, July 31 – August 3.

The Junior Invitational at Sage Valley is widely recognized as one of the premier junior tournaments in the world. It annually attracts many of the game’s top-ranked junior golfers, creating what is considered the toughest field in junior golf.